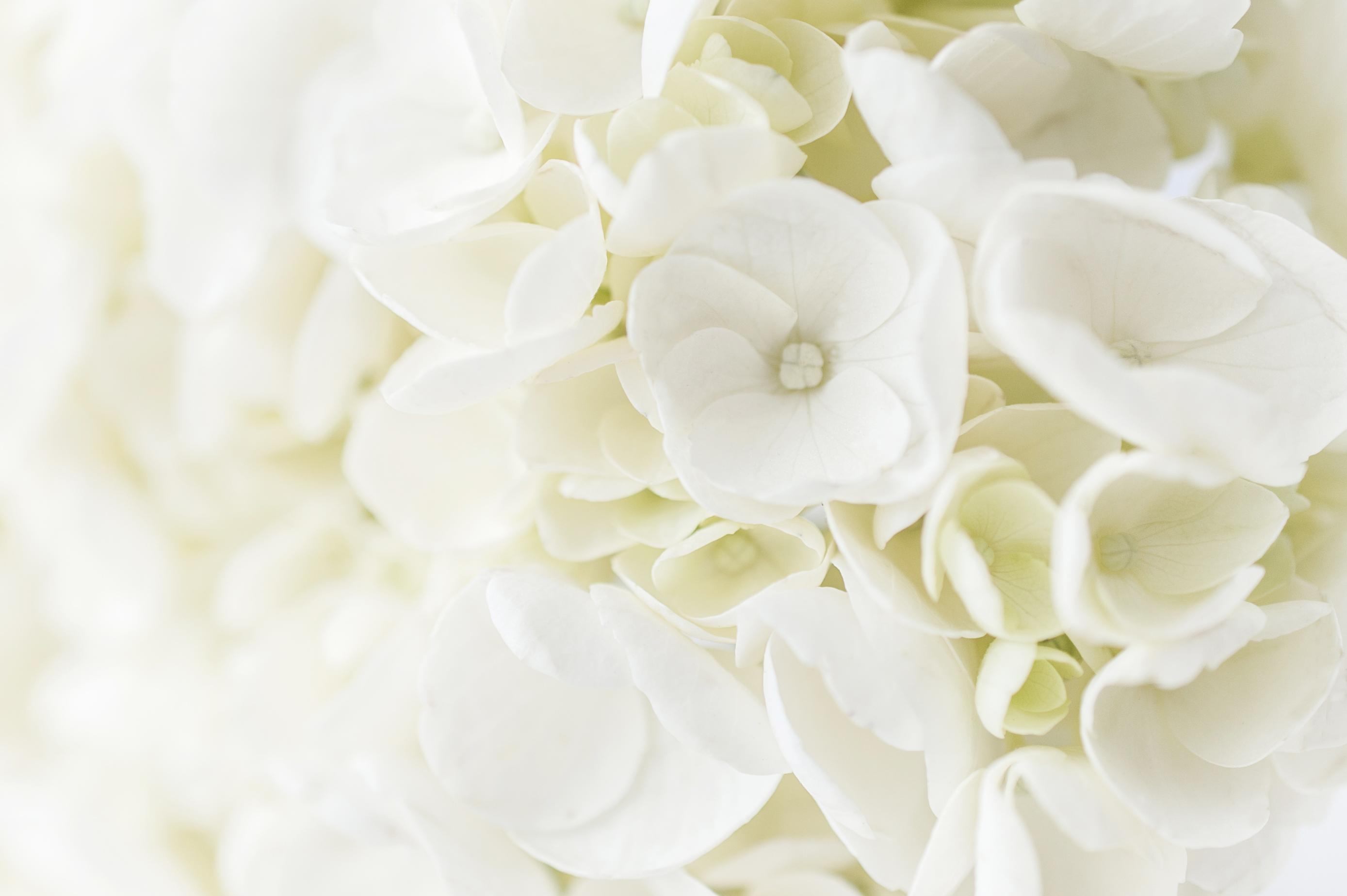 The past 7 days have been a rollercoaster of emotions. It was at this time last Monday, I decided to take a pregnancy test because I was 2 days late. Chris & I had been trying for about 3 months since I removed my IUD back in February. I was on the way home from my hair appointment when I just had a “feeling”. I had exactly 1 First Response left and figured what the heck? It won’t hurt. I’ve seen negative tests the past few months so I wasn’t expecting much. I left it on the counter for about 2 minutes and casually looked at it. Was that a very faint line or were my eyes just playing tricks on me? In a panic, I called my mom at work.

I’m pretty sure I was incoherent because she had no idea what I was even babbling about. Once I finally got control of my words and she realized I was talking about needing second eyes on a pregnancy test, her reaction was “Take another one”.  I didn’t have one. I told her I was running to Rite-Aid and I would be at the high school in 20 minutes.

Driving across town was the longest drive of my life. I was chugging water so I would be able to pee again and just kept thinking in my head “Oh my God. Oh my God”. I showed up at her work with a digital test and a regular two-lined test ready for action. I would find out if I was going to be a mom of 2 in the next 5 minutes. We decided to use the digital as it would be the clearest ‘Yes” or “No” than us having to figure out if there were in fact 2 lines. While waiting for the digital test to work it’s magic, I took a glance over at the first test I took back home and that second line had gotten significantly darker.

And then it appeared. “YES+” popped up in the window and I gasped and hysterically started crying. I was going to be a mom of 2. 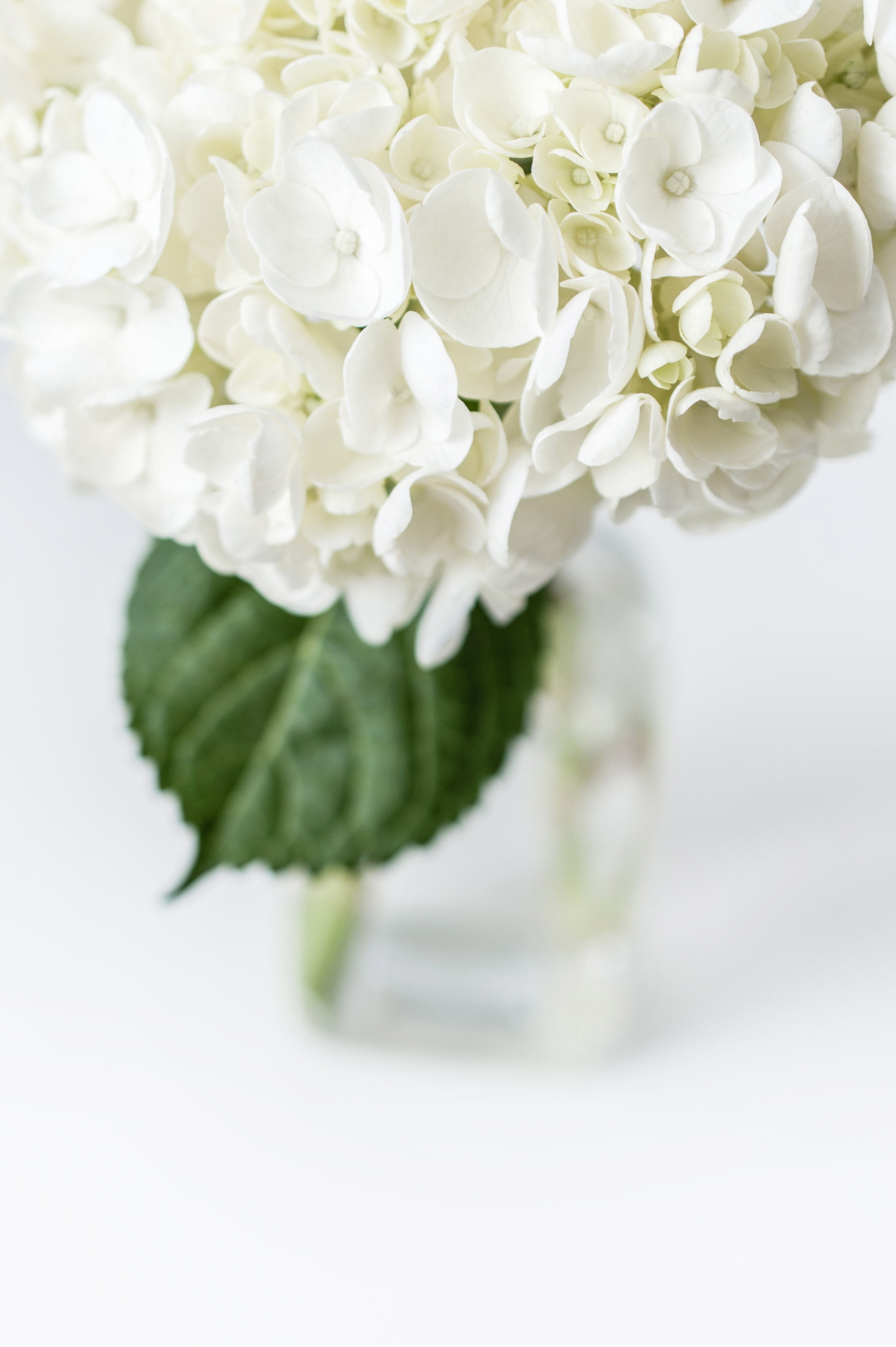 I ended up taking 2 more tests around 2 pm that same day and the results were the same. BIG.FAT.POSITIVES. I told a few family members and tried to hold it in every time Chris called me from work. I didn’t want to tell him over the phone. I bought an adorable little onesie that said “New to the Crew’, laid it out on the bed with the tests on top and waited for him to come home that night around 8:30 pm. 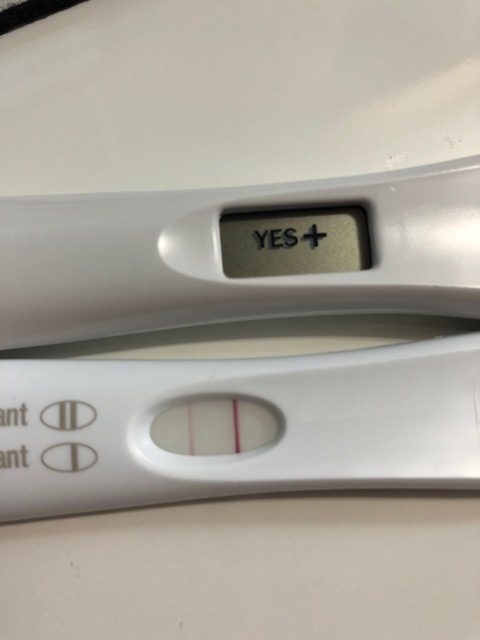 Shown Above – My 2 BFP’s! According to calculations – I was about 4 and a half weeks along

He was ecstatic. We hugged each other and cried and just were so overjoyed with excitement and love. We ended up telling Rylan that same night that he was about to become a big brother. He was unsure at first but as the week progressed, he couldn’t stop talking and asking about “Baby Peach”. All week I was emotional and had every pregnancy symptom in the book. And then came Sunday. 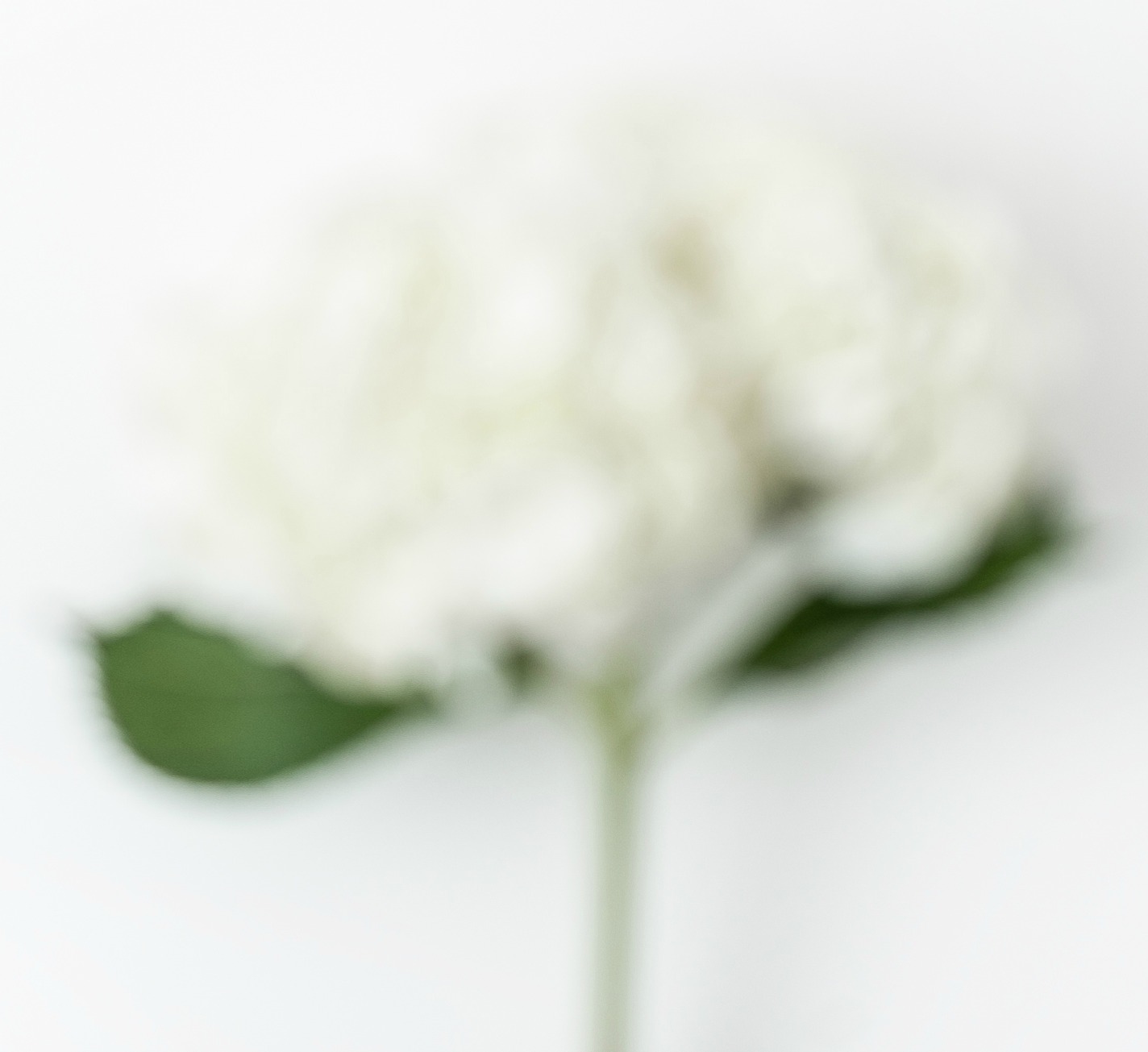 Yesterday I felt off. Something wasn’t right with my body and I knew it wasn’t. I was feeling so sick (Nauscious and occasional diarrhea) and when I went to go wipe, there it was. Bright red blood in the toilet and saturating the toilet paper. Panicking, I called Chris up to the bathroom. I wiped again and it was a light pink shade. “It’s going to be fine” he told me “Take a test and see what it says”. I had 1 extra one from all of the tests I had taken earlier in the week. The 2nd line was barely there. If you squinted, you might have been able to see it. I knew something wasn’t right. The tests I took at the beginning of the week were clear as day.

I grabbed another 3-pack of tests at CVS which included 1 digital and 2 early first response tests. I took 1 of each and waited. Both showed a clear negative.  My heart broke. What was happening? I didn’t understand – I had 4 clear positive tests on Monday and now today it’s negative.

I cried. I cried uncontrollably for a long time. By some grace of God, I was able to get in touch with an on-call OBGYN on a Sunday. She told me the words I didn’t want to hear.

‘It sounds like you, unfortunately, had a chemical pregnancy’ 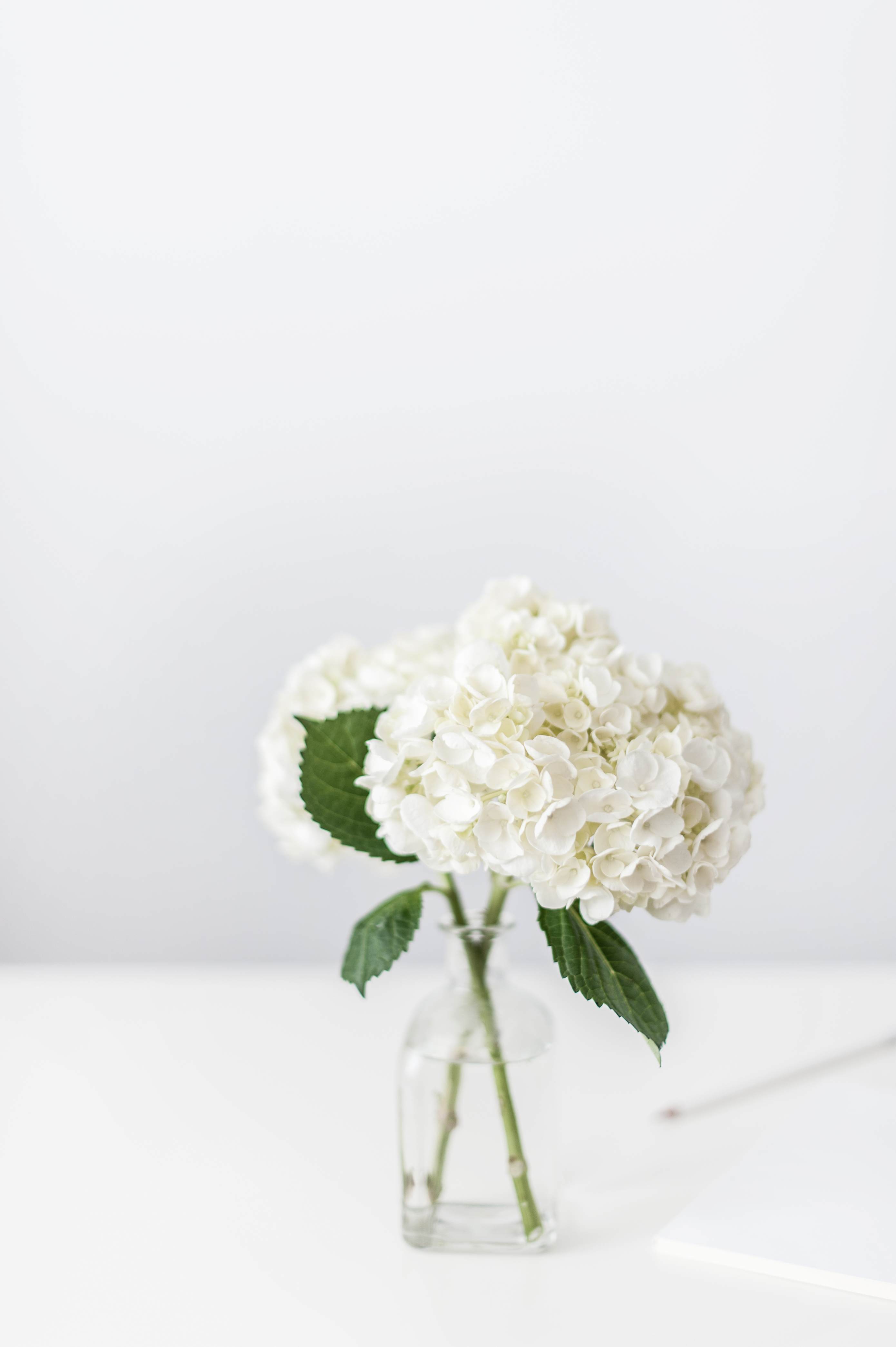 What is a Chemical Pregnancy?

A chemical pregnancy is a term used to describe a very early miscarriage which occurs before the fifth week of gestation and well before the fetus can be visibly detected on an ultrasound. A sperm has fertilized your egg, but later on, the egg fails to survive. A chemical pregnancy is believed to affect as many as 75 percent of pregnancies that end in miscarriage. (Also – I hate that word chemical – I don’t even know why or where that term came from) 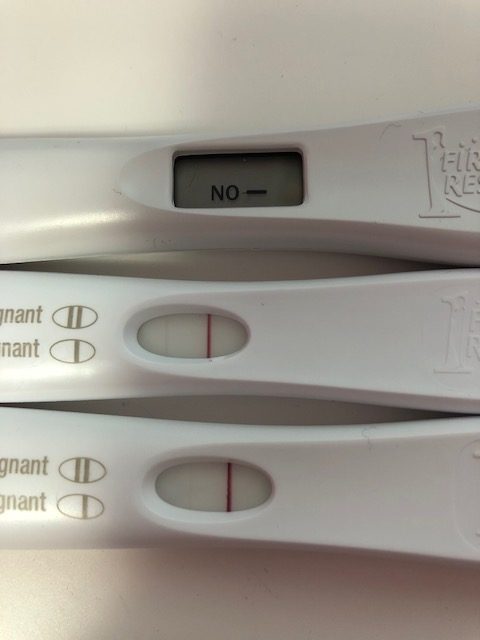 Shown Above – You can see the 2nd lines are significantly lighter as my HCG levels are dropping.

As soon as those lines turned pink, I was pregnant. I was carrying a human life. I was attached to that human life.

Yes – I had a very early miscarriage and the pain is absolutely real.  To say my heart is broken would be an understatement. Chris & I just held each other and cried. I was angry. I was broken. I was disappointed. Disappointed for myself that I wasn’t going to be a mom again. Did I do something wrong? I knew I didn’t. That I now had to tell my 8-year-old he wasn’t going to be a big brother right now.  All I kept asking myself is ‘why?’ What was God’s plan for me that I wasn’t meant to have this baby right now? I know everything always happens for a reason.  I’m trying to move forward in a positive light. I know I can carry a child. I have the sweetest boy in the whole world and I thank God for him every single day.

As I sit here and wait for the official blood results to come back, I’m currently in a lot of pain in my lower abdomen area and still bleeding. My uterus and body are trying to get back to normal. And so am I. And I will. I just need to take it one day at a time. For 7 days I prepared myself to become a mother of 2, spent hours scrolling through baby names, planned how I was going to make an official announcement and watched and listened to Rylan tell me all about how he is going to help with Baby Peach and watched the joy on my husband’s face when I told him he was going to be a father of 2.

My entire world changed with that second line and then it changed just as quickly with a bright blood stain.

Something about this time wasn’t the right time. And it’s going to be ok.

Always be yourself my darling, Be fierce and power

Everything is magical when it snows ❄️💗 Swi

All red everything 💋 . Hair: @sweetdeesbeautypa

Anyone else have a rough day today? 🙋🏻‍♀