Hey everyone! So I have a question for all of you – have you ever bought a nail polish strictly because what it was named?? Well… I did. I couldn’t resist!!

Last night at Sephora, I was browsing their nail polish and came across their holiday collection. As soon as I saw the name of this, I literally laughed out loud. (It might have been from the margarita I had at dinner, but that’s beside the point) 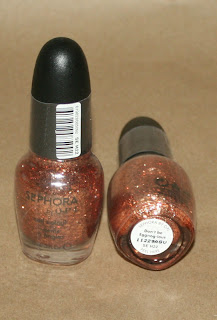 HA! I thought it was hilarious. It’s basically a clear with medium & chunky copper glitter. Too pretty to pass up!

I also bought another one called ‘Never Enough Shoes’, but looking at the swatches online, I’m returning it. Again, I bought it for the name.. but I would rather go back and exchange it for something I’m actually going to wear.

Have any of you bought a polish JUST because the name was adorable? Tell me!

Don’t forget to check me out on facebook & participate in the current giveaway going on until 4PM EST Sunday!

When you partied too hard on New Years Eve and for

#Ad Have you finished Christmas shopping yet?! I k

“Give a girl the right shoes, and she can conque